We love tomato based dishes and tomato soup is consumed quite often. As a food blogger one needs to come up with different kinds, but not so strange so the children wont eat.
Nälje wanted lasagna today, but since it is soup Wednesday I made this soup instead. 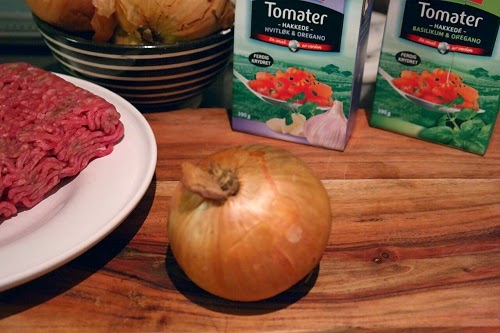 Chop the onion and saute along with the minced beef with the oil in a sauce pan.

Chop the tomatoes in a blender until you get a smooth mixture and pour  to the pan with the onion and mince beef.

Add tomato pureé and broth and bring the soup to a boil.
Add the pasta when the soup is boiling and let it simmer until pasta is done.
Add salt and pepper as desired.
(If you have a lot of time to make this soup you can let it simmer without the pasta for an hour or so to bring out the natural sweetness of the tomatoes, then add the pasta)
Taste the soup to adjust the sweetness with a little sugar.

Lastly add the creme fraiche/sour cream and a handful of torn/chopped  fresh basil.Serve the soup with grated Parmesan, garnish with a few basil leaves and some nice bread. 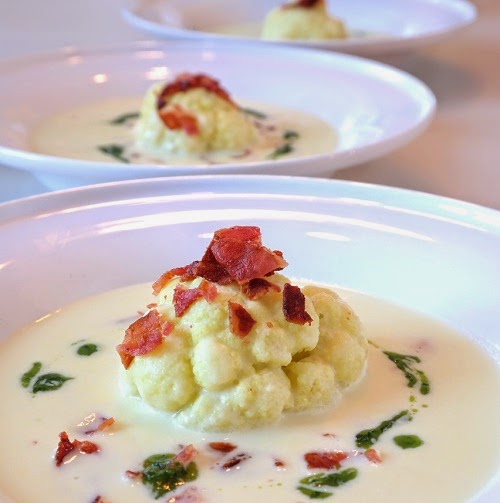 How long does take o properly heat up a can of soup or a packet of soup? 10-15 minutes maybe. Home made vegetable soups is just as easy to make, specially this cauliflower soup. With a few ingredients you can cook a soup in almost the same amount of time.
For 4 people need
1 Head of Cauliflower
1 liter chicken stock or vegetable stock
3 dl cream
Salt to taste.
1 pk bacon
Ramson(wild garlic) puree, basil pesto or some other green type of garnish
White pepper as desired
Serve with some nice bread
Put the bacon in the oven to bake or in the microwave, then you will have this process out of the way.
Divide the cauliflower head into smaller pieces except for 4 bouquets that you will need or can use as garnish, boil hem with the stock until they are tender about 5 minutes.
Remove the 4 bouquets and set aside for later.
The rest you mash with an immersion blender and pour the cream in with the mixture and give it a slight simmer on medium heat, give it a stir ones in a while so it won’t burn.
Salt to taste.
By now your bacon should be ready and give them a rough chop.
Place a cauliflower bouquet in a bowl then pour the soup and  garnish with bacon bits and ramson pure, add white pepper as desired. 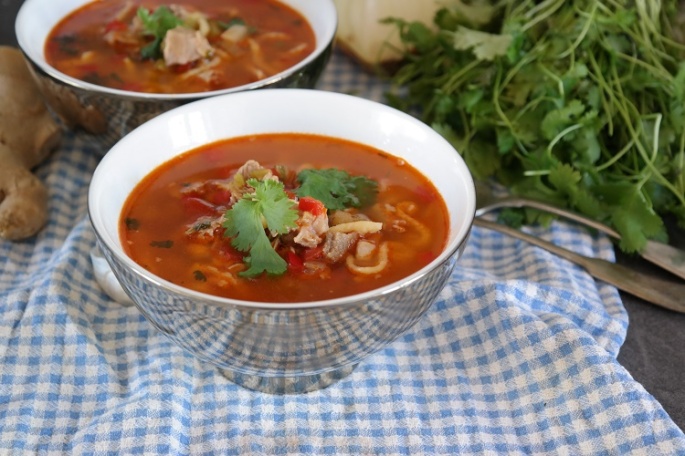 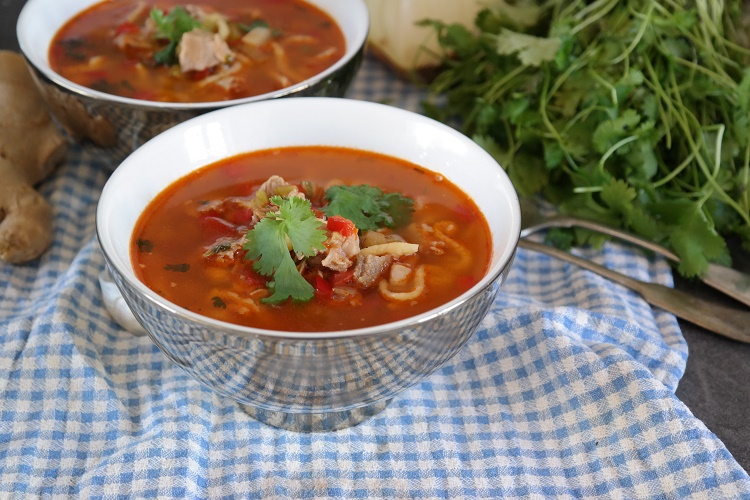 Are you curious aboout the different dishes from around the world? I am.

At my place of work I have colleagues from different nationalities and three of them belong to an ethnic group called Uyghur, two from Kazakhstan and one from China. Ever since I found out about their background I have been asking them about Uyghur cuisine and what kind of traditions they have. The first thing I remember saying was “wow, what are typical dishes from your region” and one day one of them handed me a cup with soup and said “Here, I brought you some soup since you are so interested in our local dishes and tell me what you think”. I accepted the cup and took a long whiff and it had the distinct smell of lamb and after a mouth full  of this hearty soup I could taste other ingredients like paprika, garlic and coriander.

I asked for the recipe, she said she did not use any but I did get instruction on  how she goes about making it. Here is the result of my attempt on making this soup.

Süyuash is the general term for soup with noodles and if I understand it correctly you can use other ingredients to make a süyuash(soup) as long as it has noodles in it. 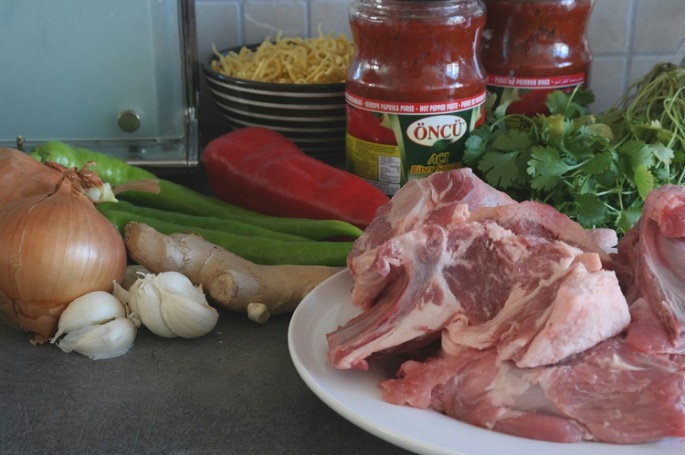 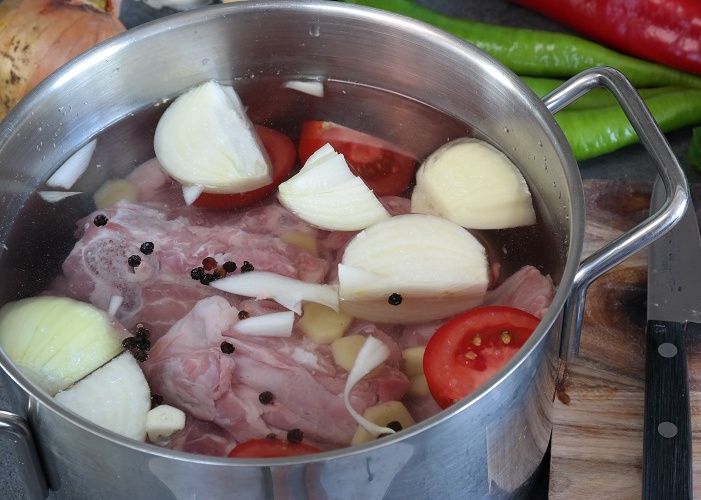 Coarsely chop the vegetables and put all the ingredients in a pot and bring to a boil, then turn down the heat and let it simmer for about two hours. During simmering, you’ll need to remove the impurities that float to the surface. A frothy/foamy layer will form and it can be easily scooped off with a big spoon. Throw this part away. I typically check it every 20 minutes to remove this.

Strain the soup and dice the cooked meat  and put aside.

1/2-1 cup pasta, depending on how thick you want the soup.

A couple of handfulls of chopped coriander

Salt and pepper to tase.

Dice the vegetables and sautee for a few minutes in a little oil. Add the broth, meat and paprika paste, and let this simmer for a few minutes or until the veggies are soft. Then add the pasta and when this is to your liking add chopped coriander and garlic.

Serve this with freshly baked bread and enjoy. 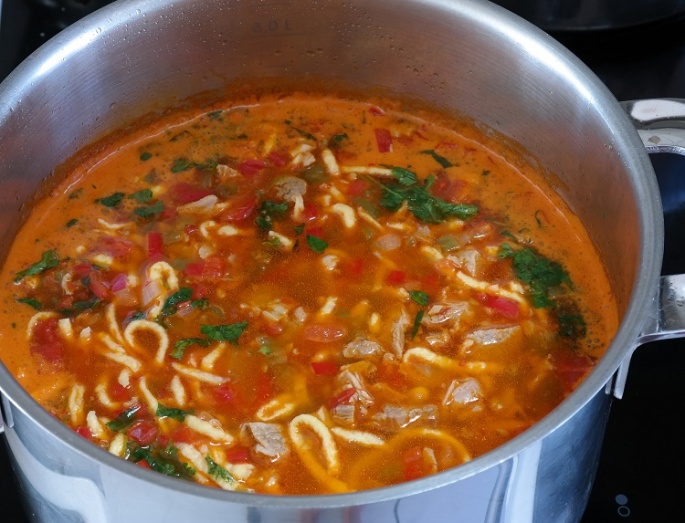 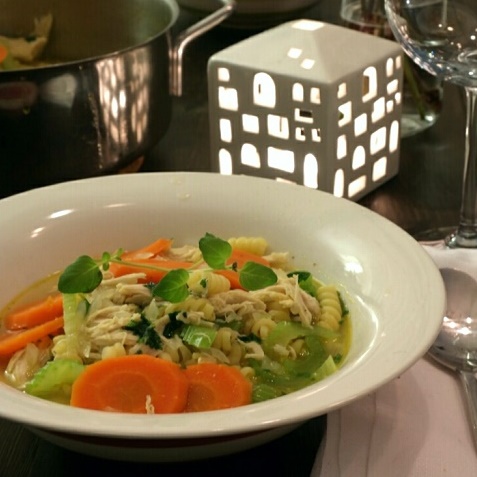 If you are not feeling very well, brewing on a cold or just simply ill.

This Filipino chicken noodle soup differs from other simmilar soups is that in this one you add milk to the soup. But tisk, tisk, I drropped the milk and used fusilli instead of macaroni
–
2 tablespoons extra virgin olive oil
1 chopped onion
3 cloves crushed garlic
2 teaspoons finely chopped fresh ginger
1,5 liters of chicken stock
(1 cup milk)
2 carrots, cut
2 cups uncooked pasta
2 stalks celery
Shredded meat of one chicken
Salt and pepper as desired
I added parsley and chili to this soup, not very Filipino, but I thought it looked nice. 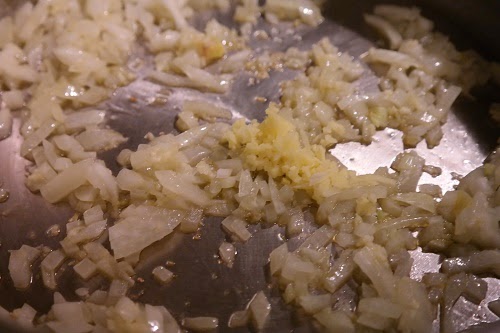 Saute the onion, garlic, ginger in a pot until the onions are glossy.
Add the chicken stock, carrots and pasta, boil for five minutes before adding the remaining ingredients except parsley and chilli.
Let this simmer about 5 minutes until pasta is done. 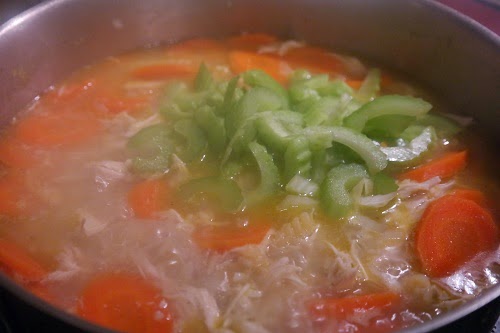 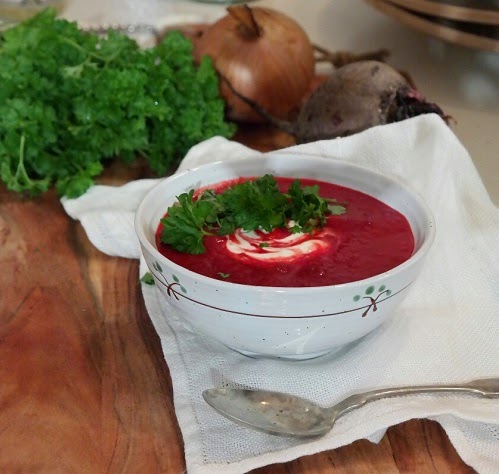 When I see fresh beets I think about Borsjtsj, a hearty warming red russian soup. a wonderful soup to enjoy during winter that liven ones day with its bright and beautiful color. You can serve this soup as a starter or as the main meal of the day with sour cream and freshly baked bread. 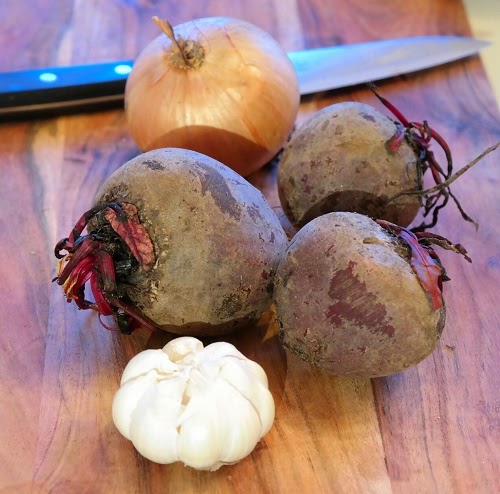 Add stock, tomato pure and bring to a boil. Reduce the heat and let the soup simmer under cover for about an hour untill all the ingredients are nice and tender.

Mash everything with an immersion blender untill everything is nice and smooth. Heat the soup again and season with sugar, salt and pepper. 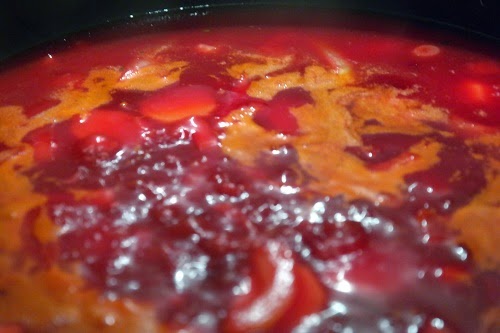 Enjoy the soup warm with sour cream, a sprinkle of chopped fresh parsley and some yummy bread. 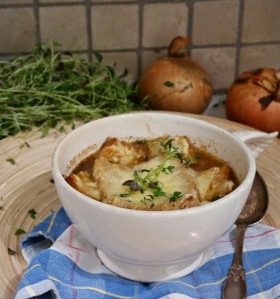 I can recall the first time I tried this soup. It was mid eighties and this was the rave of the bistro scene.

But alas the one I tried was weak vinegar tasting, the onions seemed cooked in the soup and not caramelized, the bread was just soggy with a few bits of melted cheese. It is safe to say that it took a while before I tried this soup again.

The next time I tried it was heaven sweet and a little sour, with soggy and crisp bread with tons of melting cheese and since then I have eaten and made this soup once in a while.

1 cup of white wine or juice of 1 lemon

A handfull of fresh thyme

Cut the onions into 1/8 inch slices and caramelize it in a pan with butter and oliveoil.

With four of the bread pieces I made cheese topped crutons to give the soup a little crunch, pluss that the bread will not become to soggy right away. 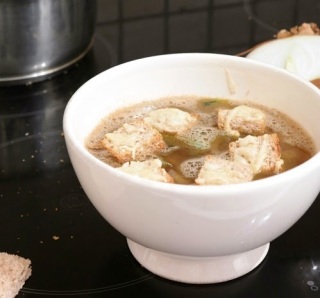 If you do not have oven proof bowls you can just do the step I mentioned above the picture, put your bread slices in the oven with cheese and put them in your soup when finished. 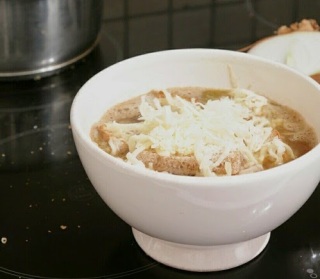 Put a breadpiece over your crutons and ad a handfull of cheese and put it in a preheated oven (225 C or 430 F) and bake until the cheese is meltetd and have a nice color.

Serve piping hot and garnish with a little fresh thyme

Apparently Wonton means to swallow a cloud, the little dumplings look like little clouds floating around in the soup and the Filipino name Molo is from a place in the Philippines they say the Filipino version come from. 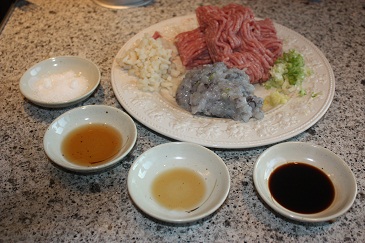 This portion gave me about 70 wontons 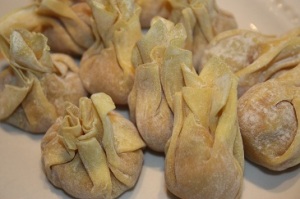 Heat up 2 to 2,5 liters of chicken broth and when it is boiling put the dumplings in and let it simmer
for 10-15 minutes.
garnish with prefered vegetables. In the picture above I have enoki mushrooms, cilantro, chilli and chopped spring onions in my soup.
These dumplings are nice to fry also and serve with sweet chilli sauce 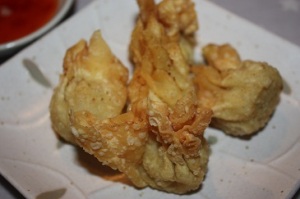 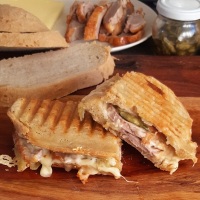 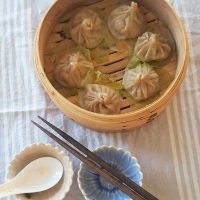 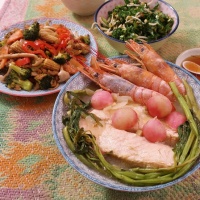 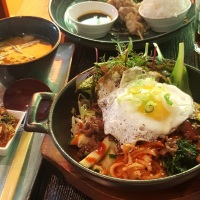