Last year at the Gladmat food festival in stavanger I got to taste sour cream drop doughnuts. Heavenly soft and light fried buns coated in cinnamon and sugar.

A little while ago I found some at a bakery and bought some and they were still as I remembered them. I tried to figure out how they were made and there was something that reminded me of the soft choux pastry I sometimes make but a little more doughier.

After a few adjustments this is how I made them.

Depending on the size you make them, but I got atleast 40 golf ball sized doughnuts

Sugar and cinnamon for coating

In a saucepan combine milk and butter and bring to a boil and add 2,5 flour to the butter mixture at once and use a wooden spoon to beat until well combined. Place over low heat and cook, stirring, for 1-2 minutes or until the mixture forms a ball and begins to come away from the side of the saucepan.

Allow to cool for about 5 minutes, then gradually beat in the eggs one by one to make a smooth, shiny paste, beat vigorously.

Add the sour cream and sift in the rest of the flour with the baking powder and stir into smooth sticky batter. 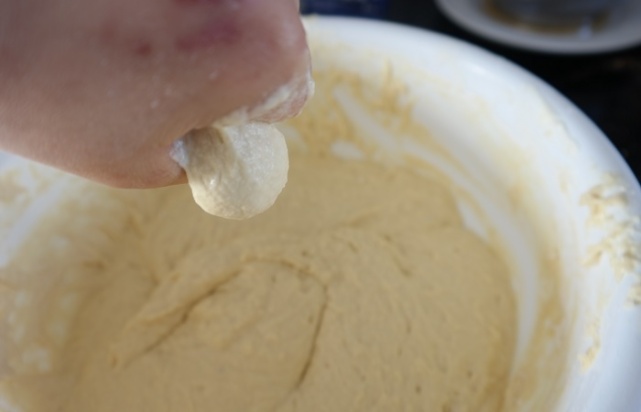 You can use your hand to squeeze little balls and drop the dough into the preheated oil.

I used a piping bag and dropped a bit of the dough into the oil. I let them fry for about 5 minutes on medium to low heat and let them fry on their own, the little fried balls turn by themselves in the oil, Look at the video above and you can see for your self.

When done take them out of the oil and drain a bit, and dip them in cinnamon and sugar while they are still hot. 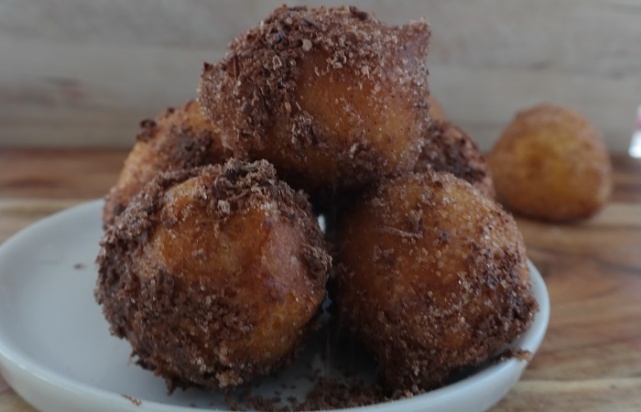 I gave some of them a little sprinkle og grated dark chocolate.

I met one of my fellow Gladmat food festival judges Anders Husa at a wine tasting event, he also enjoyed the doughnuts from last year I remembered. I was happy with this recipe, but I had to have them double checked and since I knew that he was going to the wine tasting I brought some with me. Who better to try them than Norways up and coming food critiques, check out his blog and follow his culinary trip and get tips to where to eat. The wine tasting was a crowded event and we met another blogger Erik Kvalebrokk. The guys tested the doughnuts and they passed the taste and texture test. Anders thought they just as good as the ones we got in Stavanger.

One thought on “Sour cream doughnuts”

This site uses Akismet to reduce spam. Learn how your comment data is processed.